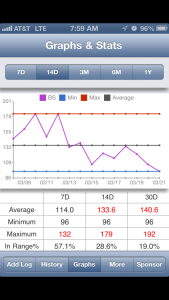 My blood sugar readings from the iPhone app called BloodSugar. Click to enlarge.

Ten days ago I started a new eating plan. I am eating very low carb for eight weeks in the attempt to lower my blood sugar and get off the insulin shots and diabetes (type 2) medication (Metformin) that I take.

I have been on Metformin for over eight years and the insulin shots were started after last summers’ hospital stay for Acute Pancreatitis.

Ruthie has started a new venture – a company called Diabetes Free DFW. She and her business partner, Deneice Scott, are holding classes, once a week for 16 weeks to educate participants about how nutrition can help them take charge of their own health and beat diabetes the natural way. The classes teach a method called The Diabetes Free Zone System.

The image shows my daily morning fasting blood sugars for the last 14 days. This morning it was 96. I have not seen a 96 since before June 11, 2012 when I went into the hospital.

I am very pleased with my progress on this plan. If my readings stay under 100 for three days, my doctor says to reduce the insulin by five units. If it continues to stay low, I can lower it five units until I am off the insulin.

This stage of the plan is eight weeks trying to hold to 60 carbs or less daily. So far, I have managed to be under 60 once, but have been close a few days. The first few days I kept thinking “no way am I going to go a whole day under 60 carbs,” but it actually is possible.

I have been keeping track of my daily food intake with an iPhone app called MyFitnessPal. It is intended to be a calorie tracker, but it also tracks carbs and that is what I am paying attention to. I have also lost 6-1/2 pounds in the last 10 days, but that is not my primary goal – getting off the diabetes medications is the primary goal.

I’ll try and post updates as often as I can. A big challenge coming up is the Jewish holiday of Passover. It’s not the week of not eating bread that is the challenge, but the two traditional meals with big Jewish families that I will have to negotiate carefully to stay on track.

I urge anyone wanting to rid themselves of the complications and medications of diabetes to look into taking these classes. i am learning so much about eating right and nutrition at each class.

Benefits of taking your dog(s) for a nature walk 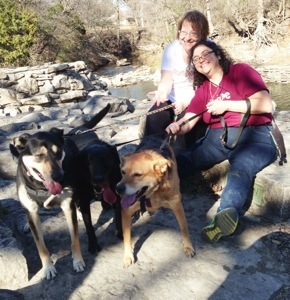 This weekend we got together with our good friends, Joe and Risa Liken, at a local park that has a creek and trails along both sides.

We also brought the doggies, which in this case, was our Allie and Tasha, plus the Liken’s Shana.

It was a very enjoyable outing and I think we did about 3.5 miles according to Joe’s iPhone app that tracked the trek.

The weather was perfect. Sunny and in the mid 60’s.

So, what are the benefits of going with the dogs?

– Forced us to walk longer than we might by ourselves

– The dogs get sunshine and exercise

– Builds strong bonds with our friends, the Likens.

We are normally notorious for neglecting walking the dogs. This was a good thing for us to do.

53 years of no red onions, boy was I missing out 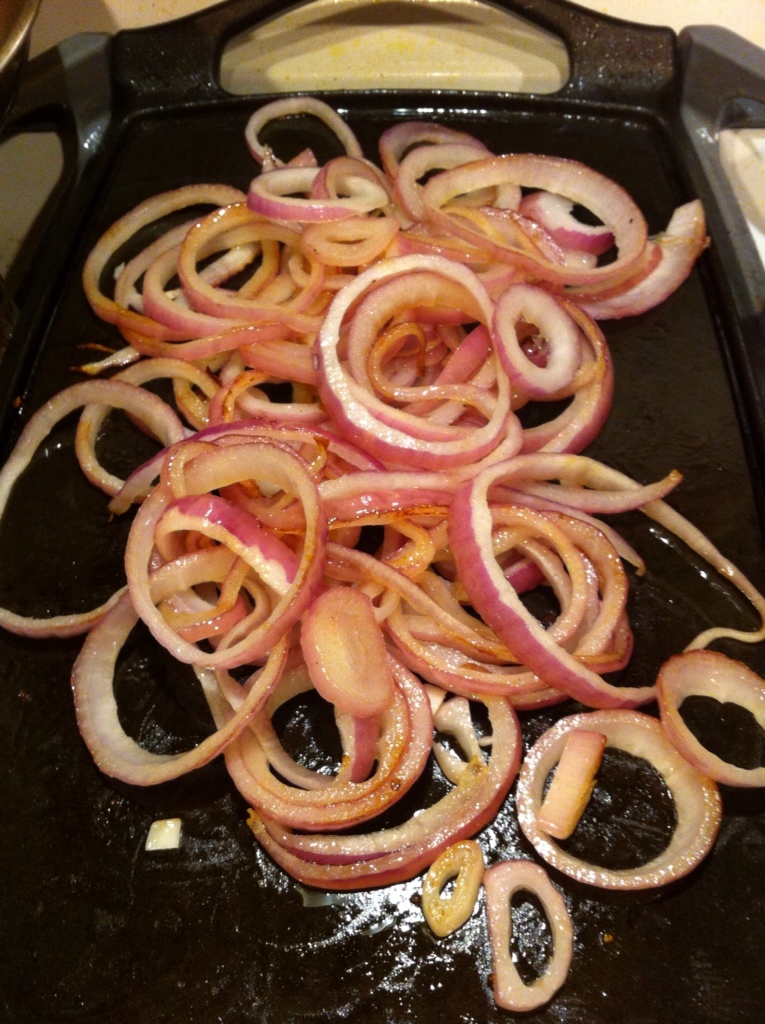 Ruthie and I toasting up some tasty sautéed red onions.

This past year, after 53 years of not wanting to try red onions, I finally, for no reason really, tried them and decided I really liked them.

Yes, even I think this is pretty bizarre. For most of my life I did not want anything to do with onions. I drove my family nuts because everyone else in the family likes onions.

I think most of it has to do with my wife Ruthie and the much healthier lifestyle I have adopted since we have been together. We will celebrate eight years of marriage October 10th.

She cooks so much with onions I first started eating cooked onions, which I have to admit are pretty good. I never did graduate to eating raw (regular) onions, but for some reason, I think it was while we were on this year's trip to Colorado for my son's wedding, I finally tried red onions.

Boy are they tasty! Our friends Joe and Risa Liken were on the driving trip with us and they thought I was crazy to first start eating them at 53. Ruthie just smiled and enjoyed another triumph of her common sense approach to all things natural.

I still won't eat the other types raw btw.