By Dennis Guten on September 8, 2007 No Comments

We just got to San Antonio tonight after a long day. We are staying right behind the Alamo in a high rise Mariott Residence Inn that is actually right next to a very old synagogue that has been turned into a night club and there was a line of about 100 people outside waiting to get into the club when we walked by.

Kinda strange to see this re-use of such an old jewish structure. The Star of David was still above the door (it’s actually part of the building).

It was a nice ride down and we got here, walked to the river and had dinner on the River Walk. Here’s a shot I took of Ruthie on the way back to the hotel.

Note: In Nov. 2010 we went back and actually spoke to someone at this club and they knew the history of the building. It turned out NOT to have ever been a synagogue, but a German club and the Star of David was used by the immigrants as a symbol.

By Dennis Guten on December 2, 2006 No Comments 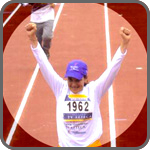 My sister-in-law Florie has just finished her 2nd marathon in Mexico, where she lives. We are quite proud oh her for her accomplishments and having the stamina to finish.

Florie has recently begun seeing a nice Jewish gentleman in California and she seems to be doing just fine.