Our vacation to Taos, NM in search of powdery white snow 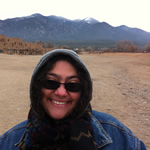