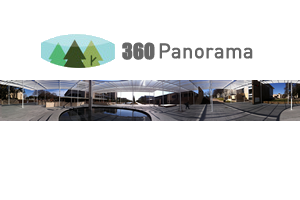 I purchased an iPhone app for photography a few weeks ago called 360 Panorama. It was late at night, so I tried it out from bed and the light was so low that the results were really poor, so I promptly forgot about it amidst the glut of apps on the phone.

So a few days ago I was doing my daily campus walk at Ut Dallas, where I work as a Web Designer and I found myself in the center of the campus, which had recently been renovated and redesigned. I remembered 360 Panorama and pulled the iphone out and took a quick full 360 degree photo from this spot.

Well, in the phone itself, it’s pretty hard to see if the shot was good, but when I got back to the office I emailed the photo to myself and opened it up on my iMac and it was really nice. It comes out with this odd white border all around the shot where the app mixes the pieces of the shot together. A quick trip to Adobe Fireworks, my editor of choice, and the result was a great panoramic shot of the campus!

The full-size panoramic image is available if anyone wants to download it.

There are not too many controls, you choose either a white or black background for the uneven edges, push start and slowly and carefully move the camera around.

My boss thought it was cool and wants me to try it in a few months when the greenery comes back and to use a tripod. I’ll do that with the little iPhone 4 accessory I purchased recently called the Glif, which allows you to attach the iPhone 4 to a tripod.

360 Panorama is only $1.99 and well worth it in my opinion. Anybody else tried this app yet? What are your opinions?