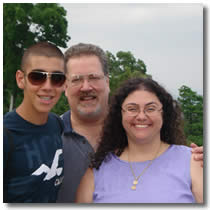 I just got back from a wonderful family vacation to Milwaukee, Wisconsin for a big party for my uncle Nate Taffel’s 80th birthday.

That’s Jon, Ruthie and I with lake michigan in the background.

There were over 100 people at the party and it was great seeing many family members and friends I have not seen since last year when Ruthie and I went for Nate’s wife’s (my aunt Mur) 75th birthday. It was sorta de javu in that it was in the same place and a lot of the same people were there.

A couple of observations from the trip…

The airline portion, on American Airlines, was pretty much a pain in the you-know-where. Between the security deal, taking off my shoes, dealing with my laptop (more on that in a sec) and trying to avoid checking luggage (because of time, not the surcharge, we booked before the surcharge applied) the whole deal was yucky.

It was one of those tiny jets for like 80 people where they squish you in like sardines into 3 seats across (1 and 2). Very small space for a 2 hour flight.

On the way back I got up to go to the lavatory and 2 rows from it, this older lady gets up and goes in, making me stand there like a moron while she went in and out 4 times (she could not figure out how to close the door to get the light to go on).

The other yucky part was the baggage. they take your bag at the end of the jetway (whoever thought up that term?), put a red tag on it and give it back to you after the flight lands.

Fine. but, the plane lands in Dallas and 50 people are standing in the jetway waiting for the bags and the door is open and it is 102 degrees outside. It was like an oven waiting for those bags. shame on you American Airlines.