Ok, so here’s the question…has the New Yorker Magazine gone too far in the cover image for the current issue? 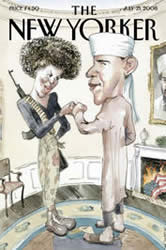 The cover depicts Barack Obama in a robe and turban and his wife Michelle Obama with a huge afro haircut and a machine gun slung over her shoulder.

There is also an inside story in the New Yorker Magazine about Barack Obama’s political upbringings in Chicago from 1995 on.

So what do you think about the New Yorker’s choice of putting this cartoon on the cover?