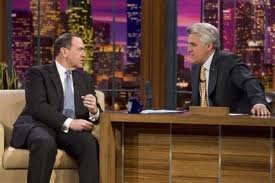 That was great, now New Hampshire might not be so easy. I do applaud his decision to not air the negative ads against Mitt Romney. It would have been a mistake.

He was great on Jay Leno the night before too.

Jay was real nice and Mike came across as very reasonable and got to talk about his policies at length.

He was also competing with Hillary Clinton, who was on the David Letterman show the same night.